Our first full day on the cruise! We love having room service as our wake up call. Since we planned to attend the eleven a.m. presentation on “Welcome to Latin America,” it was easier to have coffee and a light breakfast delivered.

One of the best parts of “at sea” days is learning from the “Speaker Series.” With topics specific to the areas we’re visiting, it’s akin to an introductory college course and greatly enhances the experience. The vast majority of speakers have been excellent.   And, Tommy Sue Montgomery, PhD, was fantastic! Her education, background, and twenty-five years’ experience of living in Central America, prepared her well to share information. Her forty-five minute overview was a concise introduction to the history, culture, economics, government, religion, and language.

Here are a few tidbits: When South America was “discovered” in the 1500’s, the entire region (including Central and North America) was called America. Until she mentioned it, I never knew that Latin American’s resent Norte Americanos (North Americans) simply calling themselves “American.”

In the early nineteenth century, the United States was THE model for government as the Spanish Colonies achieved their independence from Spain. Only the governments of the English-speaking Caribbean Islands and Belize are based on the British model parliamentary system.

Though the continent is predominantly Catholic, Protestantism has been growing for thirty years due to the evangelism efforts of missionaries and the Bible being translated into Spanish. Now the people can read for themselves instead of attending church for the priest to read it. The new mayor of Rio de Janeiro is an evangelical pastor.

The population is fairly evenly split between Spanish and Portuguese, with a minority of French. Twenty-two Mayan languages are spoken, none of which can communicate with each other.

The inhabitants of Cuba, Haiti (not part of South America,) and Brazil, continue to embrace many Afro-American traditions in their daily life. Tommy Sue shared that though Mexico has tried to ignore Afro-Mexico their latest census does include residents who identify with that ethnicity.

She shared several key points to remember when visiting this part of the world:

Though there are a variety of daily activities, one of my favorite is the Digital Workshop classes. Offerings include Learning to Navigate Windows 10; Getting Creative with Photo Gallery; Making Movies with Windows 10; Finding the Right Device; and even Learn to Use Your Digital Camera.

I’ve been using Windows 10, for a few months now, however, I did pick up a couple of helpful tips from the class and refreshed my memory on creating a panorama using Photo Editor. The instructor, Mike, patiently guides students who have various levels of experience.

After Happy Hour and a light dinner, we returned to our cabin to find gifts all embellished with the 2017 Grand South America and Antarctica Prinsendam logo. The messenger bags are handy both on and off the ship. They must expect we’ll need umbrellas, and the folders with note cards will be fun to send to family and friends.

We watched “Assassination Tango,” starring Robert De Niro. Though it was fiction, since we’re going to the land of “tango” it was pretty interesting.

The gentle rocking of the ship lured us to sleep and pleasant dreams.

CruiseCritic.com is the website that has been most helpful for gaining knowledge about the various ports and getting acquainted with fellow cruises before we even embark. Mary Anne, who is on this cruise, compiled a printable “booklet” that includes the itinerary; typical weather, a schedule of “meet and greet” opportunities; scheduled special events onboard; and, profiles on fellow cruisers who provide their photo and very brief biographies. The booklet helps us get acquainted ahead of time with people who share common interests, such as genealogy, cribbage, trivia, etc.

This morning was our first “meet and greet,” with seventy-five people in attendance. The ship provided coffee, tea and cookies. We were impressed that the captain, guest relations director and hotel services director were also in attendance and introduced by the cruise director.

It was fun to hear where others were from as each introduced themselves. And, surprised to meet three people from Eugene. . . just sixty miles east of our little town!

After time to get acquainted, those who wished to participate divided into two groups for a “cabin crawl.” This provided the opportunity to see various classes of cabins of those who graciously made theirs available for viewing. With the exception of the Signature Suite, the rest of the “outside” cabins, were the same size as ours. The inside cabins were very small and had twin beds. One person in the group was traveling single, so it was perfect for her. I’m afraid it would have been a bit crowded for us. Our amenities were the same, though some had tubs, some had showers, and some had balconies. The Signature Suite was about a third larger and had a flat screen tv and larger seating area.

Since the Cabin Crawl required using the stairs several times, rather than wait for the elevators, Larry opted out. I met up with him in our cabin and we headed to the Lido for a bite of lunch, followed by a little writing time for me and reading time for him.

We’d received an invitation to the wine tasting at two p.m., so that was the next order of business. The sommelier shared tidbits about the four wines we tasted and a few of the other wines available in the two packages available. As four-star Mariner’s (meaning we’ve accumulated two-hundred cruise days with Holland America,) we are entitled to a fifty percent discount on wine packages, which makes the price much more realistic. It’s hard to imagine that people would actually pay the advertised price for wines that sell at home for nine dollars and on the ship (without discount) for twenty-eight dollars.

The evening show was billed as the “Voice and Voices of Spencer Robson.” Though his own vocal sound was fantastic, his impersonations of the Rat Pack, Elvis, Righteous Brothers, Tom Jones, Andre Bocelli, Johnny Mathis, Gene Pitney, among others, greatly added to our enjoyment. I’ve always been fascinated when impersonators can switch mid-song to another personality. He had tremendous range and could really hold the long notes.

As we retired for the night, we were greeted by a towel animal, the obligatory chocolates, and a card with this quote, “It’s the possibility of having a dream come true that makes life interesting.” ~Beth Bingham 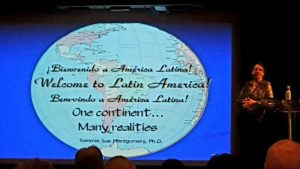 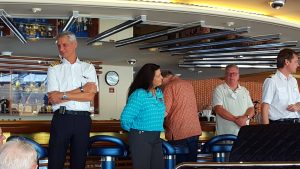 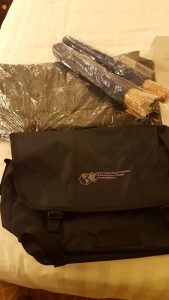 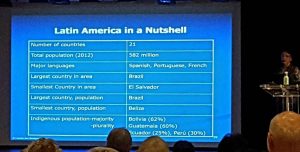 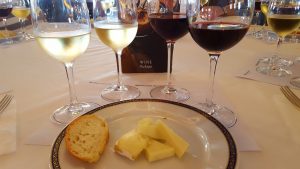