After warning Larry several times to remember the step up to the bathroom in the middle of the night, I was sleeping so soundly that when I woke at two a.m. to relieve myself, I missed the step. As I fell, my left knee hit the step and I twisted so that a muscle in my back was pulled. Thankfully nothing was broken, but it did take a while to find a comfortable position to get back to sleep. At night pain seems intensified and every movement caused me to wince.

Finally I drifted off and slept soundly. Larry left a note, and let me sleep while he went for coffee and a bite of breakfast. He returned and I finally roused about noon. After stretching a bit, movement wasn’t as painful. The shower offered some relief, and once I was together, we headed to the Lido for lunch.

Though this is only day three onboard, we’ve already seen passengers sporting unfashionable arm slings and leg braces they weren’t wearing when we started. So, that brings me to a couple of safety tips. Watch where you’re walking! There are often raised thresholds that can give you a pretty nasty injury if you trip. The spiral staircases have steps that are wide on one side and very narrow on the other. Use the handrail. When embarking and disembarking a tender, let the crew assist you. That’s part of their job.

We were anchored off Isla de Providencia and going ashore entailed a thirty-minute tender ride. It didn’t seem prudent to risk being bounced around yet, so we stayed on board. Only one shore excursion was offered by the ship, since the island is so small and services are limited. Talking with other passengers who went ashore reassured us that we didn’t miss much. Thanks to one of the other passengers, a few photos from shore are available.

It would have been interesting to see how much things cost, since the exchange rate is currently 1,000 Columbian pesos to $0.33 US dollars.

We met Juliane for Happy Hour, while Brian attended one of the computer classes.   I enjoyed learning more about Tasmania, where they live, thanks to her details and the photos she brought.

Tonight’s show featured Puck, a semi-finalist from America’s Got Talent tv show. His magic mesmerized the audience, and his card trick tribute to his dad was especially touching. One act, involving a “volunteer” from the audience was hysterical. Puck placed a “magic” coat on him, which allowed the magician’s arms to go through the sleeves and make it appear the “volunteer” was performing the tricks. Everyone enjoyed the façade, especially the “volunteer” as evidenced by his facial expressions.

In the comfort of our cabin, we watched an old movie about the Amazon, called The Mission, starring Robert De Niro. He was so young, I didn’t know it was him until Larry pointed it out. The description read, “Two men—one of the sword and one of the cloth—who unite to risk everything against the forces of two empires in order to save an endangered South American Indian tribe during the mid-18th Century.” Though it was fiction, I’m sure there was an underlying truthfulness that has carried through time as man tries to conquer man and take over their land.

The news stations available onboard are: CNBC, MSN, Fox, and BBC. All were broadcasting the horrific details of the shooting at the Ft. Lauderdale Airport. We could only imagine the chaos that unfolded as five people were killed and eight wounded. Our hearts went out to all affected . . . the victims’, travelers, their loved ones waiting to pick them up, and the employees.

Tonight’s quote that was left for us reads, “The boisterous sea of liberty is never without wave.” ~~Thomas Jefferson (1743-1826)

Somehow another day was gone and it was time for sleep. 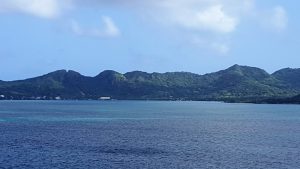 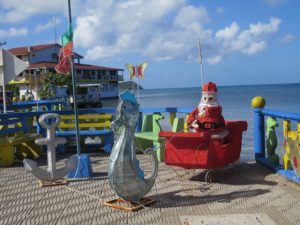