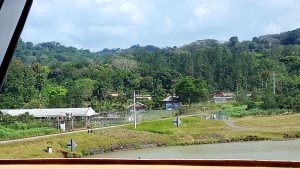 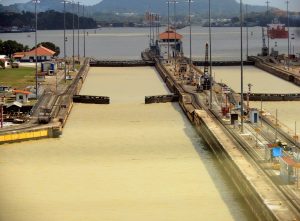 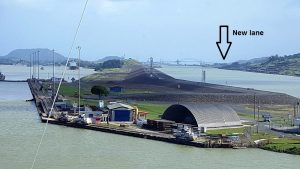 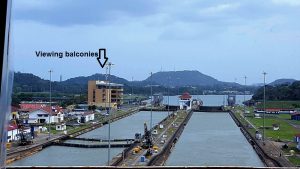 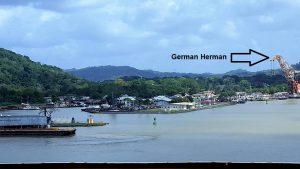 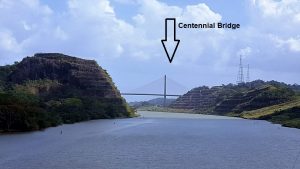 Transiting the Panama Canal for the fifth time!

Transiting the Panama Canal for the fifth time!

With temperatures hovering at eighty-four degrees Fahrenheit, it’s a good idea to keep a few health tips in mind. Time actually passes faster than you can imagine and it is easy to get dehydrated and/or serious sunburn if you’re in the sun while observing the transit. Traveling just a few degrees above the equator, the sun is directly overhead and its UV rays can sneak up on you. So, of course, the first step is a strong sunscreen. And, plenty of water to stay hydrated. Wear lightweight, light colored, loose fitting clothing. And, reduce the use of antihistamines and seasickness pills, especially “the patch.” There is very little movement in the Canal, and these medications reduce perspiration, which is the body’s natural way of “cooling off.” You won’t enjoy the journey if you have heat exhaustion or heat stroke!

The Panama Isthmus was first discovered in 1502 by Columbus. A few years later Balboa re-discovered it, and explored inland to try and find more water. He had his ship dismantled and carried piece by piece through the jungle. Perseverance paid off, and he “discovered” the Pacific Ocean. He promptly claimed all the land that it touched for Spain, in the largest real estate transaction ever.

In 1534, the King of Spain sent engineers to evaluate building a canal. They returned and said, “no way!” Or something to that effect. So, he had a road built that allowed travel from the Atlantic to the Pacific. The road sufficed until 1880, when the French attempted to build an all water route through the Panama Isthmus. Permanently deterred by financial troubles and disease they failed.  They did, however, leave behind the equipment they started with, which came in handy for the next phase.

Panama gained independence in 1903, and negotiated with the United States to construct the canal. Just overcoming the deaths caused by mosquito-borne illness was a significant part of the completion. During the Spanish-American war a huge breakthrough in fighting Yellow Fever was discovered which made a considerable difference. The experience gained by engineers, who built railroads in the United States following the Civil War, also contributed to the success.

The Canal officially opened on August 15, 2014, when the SS Ancon, a small freighter, was the first ship through. The first commercial transit of the canal was by the SS Cristobal.
David McCullough wrote a very lengthy, detailed book about it, The Path Between the Seas.  If you don’t have time to read every detail, you can watch the documentary, narrated by David McCullough, called, “A Man, A Plan, A Canal—Panama.” It may be available online at the PBS (Public Broadcasting System) website.

Though there is a lot to observe, several sights along the way are worth noting. At the west end of the Gamboa dredging division sits a large floating crane that was built in Germany during WWII. The “German Herman” was used to place big guns on German battleships. As “war booty” it came to Long Beach and was located there for many years. When the Navy was ready to decommission it, it was moved here to remove the gates for repair.

You also see the prison where General Noriega is held; and, before reaching the Pedro Miguel Locks, you go through the Culebra Cut in the Continental Divide. The canal’s narrowest part, is a continuation of the Rocky Mountains and the Andes Mountains. Rivers on the east side flow to the Atlantic Ocean and those on the west side, flow to the Pacific Ocean. Just to the west, is the Centennial Bridge, which was built to help ease the traffic into Panama City.

Frigate birds, osprey, an occasional pelican, a Peregrine Hawk, and vultures soared in front of the windows. Our speaker said that once we exit the Miraflores Lock, and are in the Pacific Ocean, the fish struggle with the influx of fresh water and soon become prey for the birds.

A building with viewing balconies is on the south side of the Miraflores Locks. Crowds of people watch the ships go through. When working properly, a camera will allow your loved ones to view your ship as it passes through. http://www.cruisin.me/cruise-port-webcams/central-america/miraflores-locks-panama2.php.

After exiting the Miraflores Locks (when traveling west) is the Bridge of the Americas. It opened on Columbus Day of 1962 and linked North, Central, and South America to vehicle traffic, at a cost of twenty-million dollars.

December 31, 1999, Panama took over full operation of the canal, in compliance with a 1977 treaty. The United States has the permanent right to protect the Canal and preserve its neutrality.

In September 2007, expansion commenced to double the capacity and allow for the newer mega ships, between the Pedro Miguel Locks and the Miraflores Locks. The new lane opened in October 2016.

Since the original opening, more than a million ships from all over the world have passed through the canal. The fifty-mile voyage takes about eight and a half hours. Most passengers seem mesmerized with every detail and time goes by surprisingly fast. An expert is onboard to provide details, stories and tidbits of information along the way. The cost to Holland America Line for our ship to go through was in the neighborhood of $280,000.00! The Norwegian Pearl is the most expensive at $480,000.00 . . . or so we were told!

After sailing under the Bridge of the Americas, you can see a variety of ships anchored and awaiting their turn to begin the path between the Pacific and Atlantic. Some must be anchored for quite a while, because a water taxi transports crew members to the mainland and back.

Tonight’s quote: “The most exciting happiness is the happiness generated by forces beyond your control.” ~~Ogden Nash (1902-71)