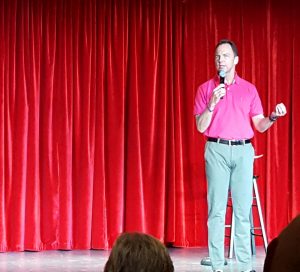 This morning’s Speaker Series: Sun, Moon, Sea, Mountains: Life in Pre-Inca Peru was appealing so I made an effort to be up and ready. Tommy Sue covered a lot of information in her nearly hour-long presentation.

Notable items were: Earliest evidence of their culture dates to 9210 BCE; Pre-Inca civilization didn’t have the wheel or writing; they developed a knotted method of record keeping called, “Quipu;” the “Chimu” (largest pre-Incan civilization) worshipped the moon; potatoes were cultivated more than four-thousand years ago and there are four-thousand varieties in Peru; the paradigm was broken that civilizations could only develop in fertile areas such as the Tiger and Euphrates. You never know when one of these could be a Jeopardy answer!

Early people obtained ninety percent of their protein from the sea and had the first urban population in the Americas. They grew cotton and used it for clothing and fishnets. They also built an 8.5 km aqueduct from the foothills to deliver water to the arid areas. Eventually they developed advanced agricultural techniques and farmed fish, developed canals, and used sludge for fertilizer. The decline of these early civilizations correlates with the sixth century climate change.

This program was followed by the, “Cruise Ship Astronomy’s Top Ten Greatest Hits,” by Dan Benedict. One of the pluses of being out to sea and away from city lights is the opportunity to see things we can’t see in the night sky at home. Dan presented in David Letterman fashion beginning with number ten: the green flash. This phenomenon is often easier to see from a ship if the horizon is clear. We’ve been fortunate to see it from land many times as well.

Number nine: the Hubble satellite moves from west to east in the higher latitudes. So, we’re unlikely to see it on this voyage. We’ll have better chances of seeing satellites that are moving north to south.   The International Space Station is almost as bright as Jupiter, but not as much as Venus. It passes as far south as Patagonia, so our chances are good of sighting it.

Since we’re in the Southern Hemisphere, Dan described the “Winter hexagon,” which begins at Orion. In Australia it’s called, “the Stew Pot.” This contains seven of the twenty-one brightest stars and six constellations.

Did you know that up to about four-hundred years ago astronomy and astrology study were the same? This was up until the studies of German astronomer Johannes Kepler (1571-1630). He discovered the three laws that govern orbital motion. Wouldn’t that be a great Jeopardy answer?

Continuing the countdown: number seven is the Big Dipper, Little Dipper, and North Star; number six are the twelve zodiac constellations; number five is “high latitude phenomena” or Aurora Borealis and Aurora Australis in Antarctica; number four is in the Southern hemisphere: the Southern Cross; number three is meteor showers; number two is bright comets, such as Halley’s (which won’t appear again until 2086) and Hale Bopp, which appeared twenty years ago; and number one is a total eclipse. There will be a total eclipse in North America in 2017, visible from Salem, Oregon to Charleston, South Carolina.

Tonight’s show was a bit special, since it was a comedian from Eugene, Oregon! That’s only sixty miles west of Florence, where we live. He was on the comedy club circuit for more than ten years and wrote for Jay Leno. His style was a bit different than regular “stand-up comedy.” He engaged in a lot of audience interaction and played on people’s responses. We hope there will be an opportunity to see him locally when we get home.

Tonight’s quote: “Remember that happiness is a way of travel . . . not a destination.” ~~Anon (One of my favorites!)