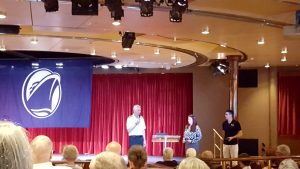 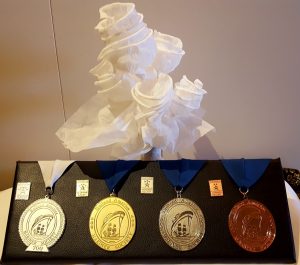 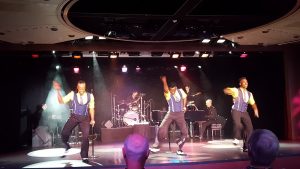 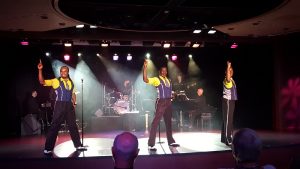 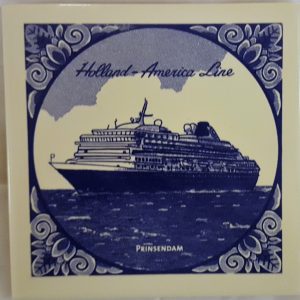 I mentioned a few days ago that we’re four star Mariner’s. This is a status that is worth achieving because besides the fifty-percent discount on wine packages, specialty restaurants, mini-bar purchases, and beverages in the Explorations Café (picture Starbucks here,) the best perk is free laundry. This is especially important on a long cruise. The smaller ships have self-service laundromats, and we spent our share of time in them before we got smart and took advantage of the package offered by the ship. It was money well spent. Now we can turn in laundry everyday if we want and receive it back, neatly folded, or pressed and on hangers.

Once you’ve completed a cruise with Holland America (HAL), you’re a one star Mariner. With thirty cruise day credits you become two star Mariner; seventy-five days equals three star status, and then a big jump to two hundred days for four star Mariner, and another big jump to five-hundred days for five star status. Actual sailing days and every three-hundred dollars you spend on board (of eligible purchases) count as cruise days. Booking a suite doubles your cruise day credits . . . as it should for what you spend. There are a few other perks as well, such as priority check-in, priority tendering, and disembarkation.

Today was the Mariner Recognition Ceremony and luncheon.   Those recognized today received ribbons adorned with medals indicating they’ve actually sailed one-hundred, three-hundred, five-hundred, or seven-hundred days on HAL.   Thirty-one were recognized as having completed one-hundred days and received bronze medals. Forty-six were recognized as having completed three-hundred actual days and received silver medals. We were in this category! This status doesn’t come with any perks besides champagne, the captain placing the medal around your neck, posing for a photo with him and the hotel director, and a nice luncheon in the dining room with more champagne. At least the ship gives you the photo with the captain for free to add to your collection.

We also receive lovely ceramic tiles with certificates stating their authenticity as being created by master craftsmen of Royal Goedewaagen, Holland, producers of genuine Delftware since 1610. As you can imagine, we’ve accumulated a few over the years and are still trying to decide what to do with them.

Those with five-hundred and seven-hundred days receive gold and platinum medals, respectively. The next level is one-thousand days and those achieving this level are inducted into the President’s Club. I hope to learn what that includes one day! Only seven hundred days to go.

Following the ceremony, we had lunch with two couples. One was from Alabama, and one from Colorado. It turned out they were also on last year’s world cruise and we hadn’t met during that one hundred and fifteen days.

As we caught up with Juliane and Brian at Happy Hour, dolphins frolicked and entertained us off the port side. After dinner we skipped tonight’s show. We’ve seen the Fly Right’s, who were performing again, three times already. They are fantastic, energetic entertainers. Performing hits by the Temptations, Four Tops, Nat King Cole, Lionel Richie, James Brown, the Drifters, Marvin Gaye, the Isley Brothers and more, you can really get your toes tapping.

Upon return to our cabin we discovered new gifts! Had we known we were going to be gifted with warm scarves, hats and gloves we would have packed a bit lighter. Hopefully we won’t need them . . . but at least we’re prepared!

Tonight’s quote: “What I admire in Columbus is not his having discovered a world, but his having gone to search for it on the faith of an opinion.” ~~Turgot.