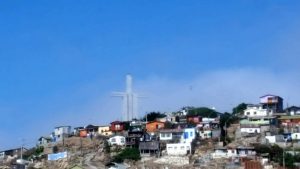 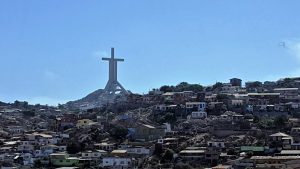 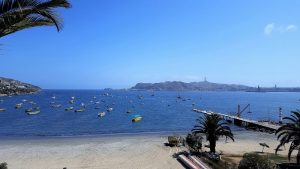 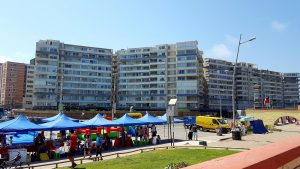 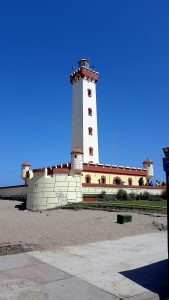 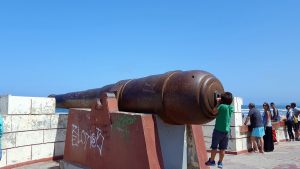 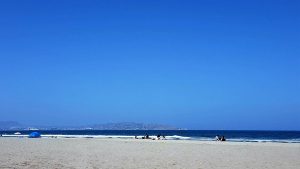 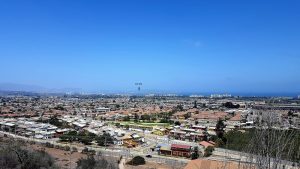 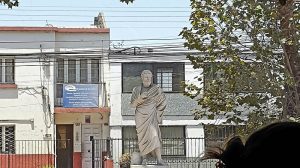 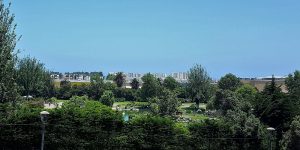 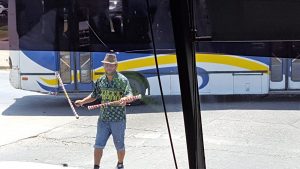 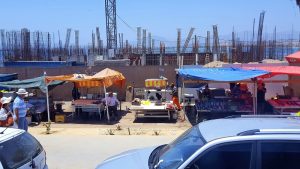 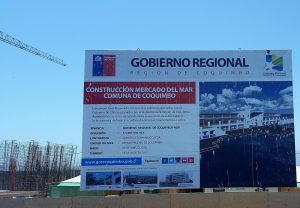 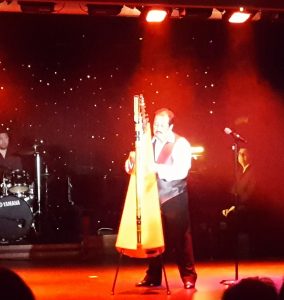 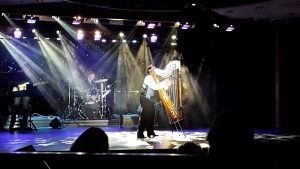 We docked at the civilized time of ten a.m., in La Serena, which shares the same bay with Coquimbo. Their combined population is four-hundred thousand. Our first view was of a huge cloud-shrouded, concrete cross, perched on a hill. It overlooked ramshackle houses clinging precariously to the rocky ground. Our tour guide told us it is called “The Millennium Cross,” and sits even higher than the famous “Christ the Redeemer” that overlooks Rio de Janeiro.

Visited by Europeans as early as 1535, the area was settled by Spanish explorer, Pedro de Valdivia, in 1550. In pre-Columbian times this region, known as the “Norte Chico” region of Chile, was inhabited by the Diaguita who crossed the Andes from Argentina and settled. The name Coquimbo means “place of calm waters,” in their language. They grew maize, potatoes and a few other crops. And, were one of the first civilizations to herd and domesticate llamas.

The gold and copper industry in the region led to the city’s importance as a port around 1840 and many Europeans, especially from England, settled in Coquimbo. In 1879 it was recognized as a town.

The semi-arid region has a Mediterranean climate and attracts a lot of visitors to its beaches, discos, and nightclubs. The Pan-American Highway has greatly increased traffic from Argentina.

We had a ship’s tour to see the highlights. Our first stop was a lovely palm fringed beach, with a fishing pier that jutted into the crystal clear, shimmering blue water. There appeared to be a lot of vacation rentals in the area. The bus driver was a master at negotiating the narrow streets.

Our tour guide, Karla, filled us in on details as we headed toward Coquimbo for a stop at El Faro Lighthouse. We were a bit surprised to see a mosque (Mezquito Centro Mohammed VI,) in this still predominantly Catholic country. The wide, white-sand beach invited families and a few surfers. Vendors offered ice cream and beach items for sale. The Miami-esque condominiums could have been in just about any beach town. The graffiti covered canon was a reminder of less peaceful times.

The bus crept through heavy traffic enroute to the University for a panoramic view of the city. We passed a several block long, open-air museum of statues received as gifts from Italy. Street entrepreneurs took advantage of the long wait at traffic lights to perform for tips or sell water and a few food items.

From the overlook at the University, we could indeed see the entire city.  Our ship was far off in the distance.  A lot of the plants were familiar from when we lived in Southern California. Agapanthus, hydrangea, and hibiscus bloomed profusely. Jacarandas were beginning to flower. Trees included magnolia, Brazilian pepper, Norfolk pines, eucalyptus, and fruitless mulberry.

Immigrants formed the first volunteer fire-fighting units (still a volunteer activity in Chile). We inched past a Japanese garden in the Friday afternoon traffic. Our tour guide said it is the largest park in all of South America. Along the way we passed the main square, “Plaza de Armas,” government buildings, and the usual . . . Mc Donald’s, Chuck E. Cheese, and Starbucks. Pop-up canopy flea markets, with wares on folding tables, reminded us of every Latin American town we’ve visited.

Seafood restaurants overflowed with patrons near the port, while portable fish markets sold the days catch.  The port sustained catastrophic damage in the 2014 tsunami and is undergoing a nearly four million dollar renovation.

Did you know? One of the churches, Iglesia de Guayacan, was designed and built by Alexandre-Gustave Eiffel! It could be a Jeopardy answer one day!

Though we didn’t need a tourist visa for Chile, we are required to carry our “Chilean Agricultural Declaration” (sworn statement) with us in each port. No fruits or vegetables can be carried ashore and their authorities either have x-ray machines or conduct inspections of bags and backpacks.

Once we were back onboard, we met up with Juliane and Brian in the Crow’s Nest, to catch up with their activities. They shared about going to the cruise terminal and accessing the free, but slow Wi-Fi. Although it’s nice when a port had free internet service, there are usually so many people trying to get caught up with their email, that it’s like the old days of using dial up. Internet on the ship is expensive. The best package is one-thousand minutes for two-hundred fifty-dollars.  At least, so far, the ships service has been a little faster than previous experiences.

Tonight’s show was an encore performance of a pianist, Naomi, and Paraguayan harpist, Francisco Yglesia. We saw Francisco perform the other night and he was amazing! I’d never heard of Paraguayan harp, but was very impressed with his mastery of the instrument. Besides familiar songs, such as Guantanamera, Bese me Mucho, Don’t Cry for me Argentina, Begin the Beguine, and O Solo Mio, he played one song simulating a steam train from Paraguay!

Tomorrow is an early wake up for Valparaiso!