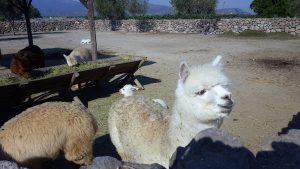 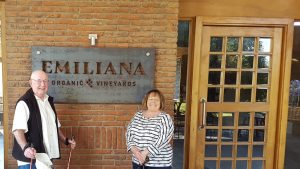 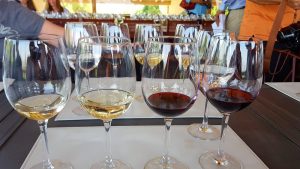 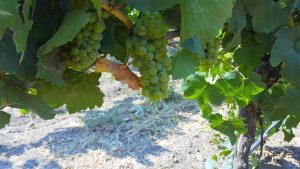 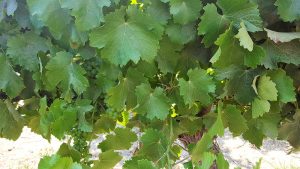 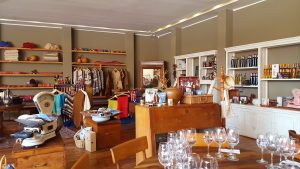 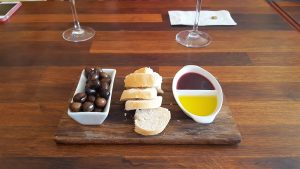 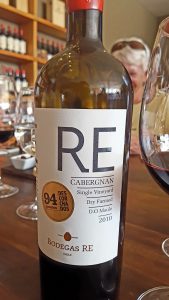 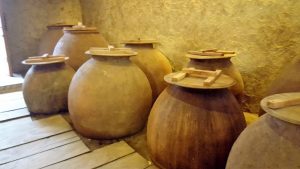 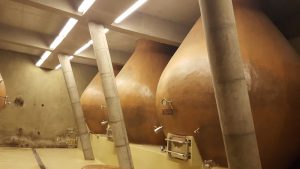 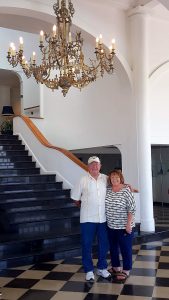 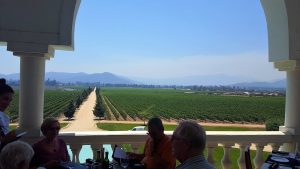 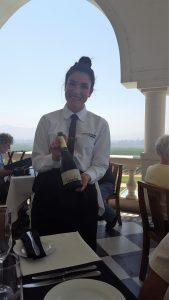 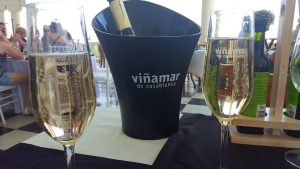 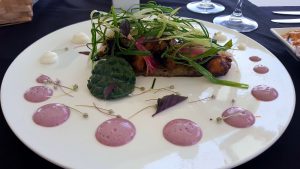 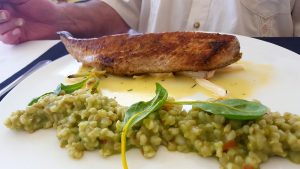 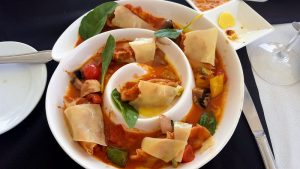 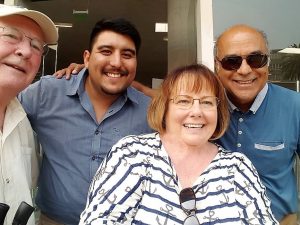 Valparaiso is a huge cargo port and the free shuttle transfers passengers to the cruise terminal for all shore excursions. This is another port where pedestrian traffic is prohibited. The cruise terminal had a small café and a handful of vendor booths. With a latitude of 33.03° South, it wasn’t surprising that the terrain reminded us so much of San Diego, California, which lies 32.71° North of the equator.  Fondly referred to as “Valpo,” it’s also known as “the jewel of the Pacific.”

Greater Valparaíso is the second largest metropolitan area in the country. Discovered in 1536, by Spanish explorers, it was first inhabited by the Picunche natives, known for their agriculture, or the Chango people, who were nomads dedicated to fishing, and traveling between modern-day Caldera and Concepcion. Chile gained independence from Spain in 1818, and Valparaíso became the main harbor for the emerging Chilean navy, and opened international trade opportunities that had been formerly limited to Spain and its other colonies.

Valparaíso soon became an international city with immigrants from Britain, Germany, France, Switzerland, and Italy. New residents founded and published newspapers in their native languages. Valpo was a desired stopover for ships rounding South America via the Straits of Magellan and Cape Horn. It gained particular importance supporting and supplying the California Gold Rush (1848–1858). Buildings reflected a variety of European styles, making Valparaíso more varied than some other Chilean cities.

Opening the Panama Canal in 1914, devastated Valpo’s economy. Wealthy families moved to bustling Santiago or nearby Viña del Mar.  In the mid-1990s, a grass roots preservation movement blossomed in Valparaíso. In 1996, the World Monuments Fund declared their unusual system of funicular lifts (steeply inclined carriages) one of the world’s 100 most endangered historical treasures. It was designated as a UNESCO World Heritage Site in 2003.

We arrived at eight a.m. and had to be off the ship by eight-thirty to meet our tour guide, Sebastian at nine. We’d booked a private tour and were happy to have our driver, Leonardo, and tour guide all to ourselves. There are many sights to see in Valparaiso and we hope to return one day to see more of them. But, for this trip we opted to visit their wine country.

Since it was Saturday, traffic was at a minimum at that time of morning. We left the city and were soon in an area that reminded us so much of Southern California’s Temecula area, that if someone blindfolded us and dropped us in we could have sworn we were there.

The “Ruta del Vino Casablanca” brochure offered this charming translation: “With a privileged location only 80 km from Valparaiso, the Casablanca Valley offers over 6000 hectares of wineries and is known as one of the premium cold weather regions for wine production in Chile.”

After nearly two weeks of seeing a lot of ocean, and crowded cities, our souls were soothed while viewing gentle hills with vineyards dotting the landscape. Our first stop was Emiliano Vineyards, an organic winery. There was time to visit the alpacas before a couple of other groups arrived. Our sommelier led us through a small portion of the vineyard and explained how they are truly utilizing organic practices. Though it seemed a bit early in the morning to sample wines, we suffered through. The cruise ships have become very stingy about allowing wine to be brought onboard, so we’ll visit their website when we return home. Several companies are importing their reasonably priced products to the U.S.

Our second stop was at Bodegas Re, where the samples were interesting blends, such as a pinot noir and sauvignon blanc. Yummy olives, bread, olive oil and balsamic vinegar was provided to clear our palates. Downstairs, they had the most unusual terracotta vessels for fermenting the wine. When larger containers were needed, they began to use concrete, coated with clay, because no kilns were large enough to fire the pure clay ones. The temperature they maintain seems to work perfectly!

We continued on to Viñamar de Casablanca, a Moorish-style winery used for special events, such as weddings. Our tour guide had reserved a table with a divine view of the vineyards. We started with an appetizer of grilled octopus. On the menu the translation read, “Northern sealed octopus on a potato tortilla, served with a fresh salad, finished with crispy onions.” We both agreed it was the best octopus we’ve ever tasted!

Larry ordered the Pescado del Dia con salsa de Locos de Quintay, which was fresh fish named, “vidriola.” The menu description said, “Fresh fish with seasonal vegetables and wheat mote (wheat boiled with lye) casserole, served with abalone sauce.” The side dish looked like pearl barley with a green sauce. I’ll have to research this one a bit more when we get home. The fish was very tasty and had pieces of “abalone” that could have been calamari.

I ordered the Diamintinos de Cordero de San Jerónimo, described as “Pasta shells stuffed with San Jerónimos lamb, finished with fresh tomato sauce and out of the garden vegetables.” Mine, too, was delicious!

After our leisurely lunch, it was time to head twenty-five miles back to the ship. Leonardo and Sebastian happily posed with us. Probably because of the nice tips! Seriously, Sebastian was a great tour guide and his English was excellent. I have his card so we can contact him if and when we return.