Did you know there are two Robinson Crusoe Islands? One is in Chile and the other in Fiji.  The island here is just over eighteen square miles and lies four hundred-sixteen miles off the mainland of Chile. The majority of the eight hundred inhabitants live on the north coast in the town of San Juan de Bautista.

Originally named Más a Tierra (Closer to Land), it was renamed Isla de Robinson Crusoe in 1966, to attract tourists and capitalize on the literary lore associated with the marooned sailor, Alexander Selkirk, who lived here in solitude from 1704-1709. Selkirk actually asked to be left on the island during a restocking stop. His captain, Thomas Stradling, obliged his wish after tiring of his dissent. All Selkirk had left with him was a musket, gunpowder, carpenter’s tools, a knife, a Bible, and some clothing. Selkirk was said to be the inspiration for Daniel DeFoe’s Robinson Crusoe. According to my friend, Scotty, Selkirk was from Scotland.

Pirates landed here in the seventeenth and eighteenth centuries. It was a stopover for the Commodore Anson expedition to the South Pacific in the 1740’s, as well as Swedish Antarctic expeditions in the early twentieth century. The island also served as a penal colony for many years. Fur traders nearly hunted the Juan Fernandez fur seal to extinction.

During World War I, Germans and British battled each other off shore. The German ship, Dresden, was scuttled by the crew after being fired upon by a British squadron. The wreckage now entices scuba divers and has increased tourism. In 2005, a huge stash of Spanish treasure was found just offshore.

Rebuilding is still taking place, following the 8.8 earthquake and tsunami, of February 2010, that caused sixteen deaths. Most of the coastal village was washed away. Many lives were spared, thanks to the warning by a twelve-year old girl, who noticed the ocean drawback preceding the tsunami.

No ship excursions were offered here. There really isn’t a lot to do on the island unless you’re a fisherman, hiker, or birdwatcher. The entire island is a national park and UNESCO Biosphere Reserve. There are sixty-one times more native plant species than the Galapagos and thirteen times more birds.

We were there on a Sunday, so the lone shop that was open stayed busy as passengers bought postcards, black coral jewelry, guidebooks, and a few T shirts. Spiny lobster, and several species of fish are dietary staples. A half a lobster was twenty-three U.S. dollars in the only open restaurant. The Archipiélago beer was pretty decent and a bargain (compared to the ship) at $4 U.S. each.

Unless you arrive by cruise ship, it’s nearly a three hour flight from Santiago to the airstrip on the southwestern peninsula. Then a ferry ride to the “town.” Our time in this rustic serenity was limited, but very relaxing.

After tendering back to the ship, Larry enjoyed football time with the Packers vs Falcons and Steelers vs Patriots. It’s hard to get excited about these games when teams we don’t ordinarily follow are playing.

We can definitely tell its summer in this hemisphere! Sunset isn’t until 9:26 p.m. Thank goodness for room darkening drapes. As we get closer to Antarctica the days will be even longer. 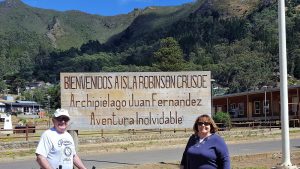 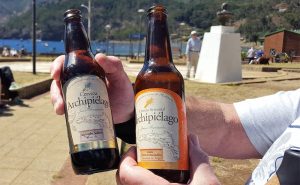 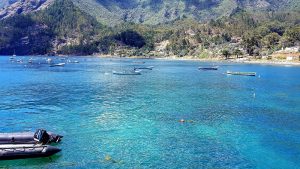 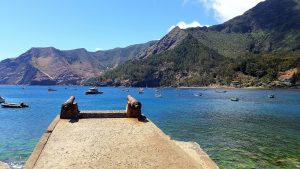 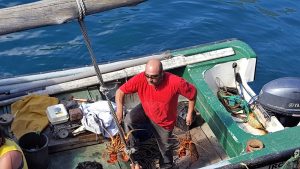 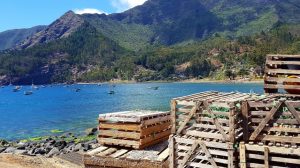 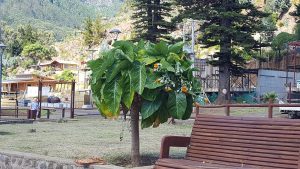