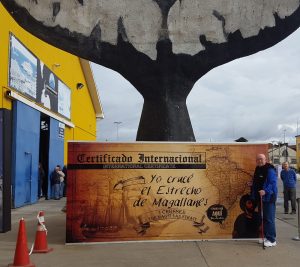 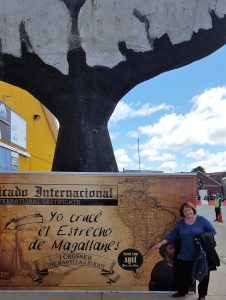 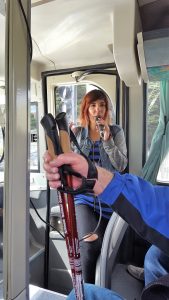 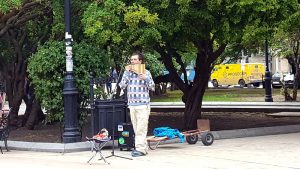 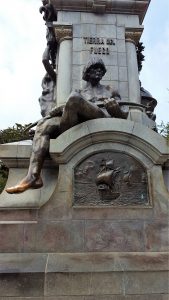 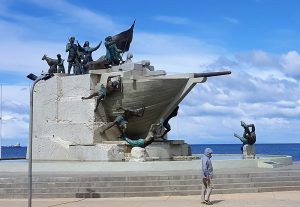 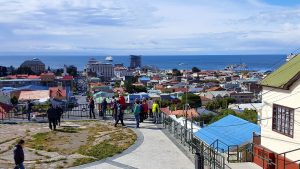 Patagonia is more than a clothing brand. This region spans the southern third of Chile and Argentina and stretches between the Pacific and Atlantic Oceans. The southern edge is the Strait of Magellan, Beagle Channel and Drake Passage. Comprising about a third of the land area of Argentina and Chile, it is breathtakingly diverse. On the Chilean side are the soaring Andes, inland fjords, rich forests and small towns. In stark contrast, the Argentine side is comprised of immense distances of barren expanses.

The Strait of Magellan takes its name from the Portuguese explorer, Ferdinand Magellan, who discovered it in 1520. The hardy people who live here consider themselves first Magellanicos and second as Chileans. With a population of 110,000, Punta Arenas attracts fishing vessels from the South Atlantic as well as Antarctic research and cruise ships.

Our ship arrived into the Punta Arenas harbor at seven a.m., but thankfully we didn’t have to meet our tour quite that early! We tendered to shore, and had a short walk to the cruise terminal where there were plenty of shopping opportunities for postcards, a variety of tee shirts, jewelry, and miscellaneous souvenirs of the usual sort.

After fun photos in front of the billboard sporting a whale’s tale and certificate acknowledging our crossing of the Magellan Strait, we exited the terminal and headed for our Costco booked tour. While we get a great price on tours booked through their shore excursions feature, we’ve found that the descriptions aren’t always complete as far as stating whether they are private or group. This one was a group, but at least it was on a smaller bus and not the forty passenger variety.

We set off with our tour guide, Gabby. First stop was the Plaza Muñoz Gamero, which has free Wi-Fi, a pan flute player with a container for donations, a street evangelist, and the resident feral dog, all set amongst the conifers and shade trees.   Gabby explained that there are many homeless dogs around the city and people put out food and water for them.

The memorial in the center, commemorating the 400th anniversary of Magellan’s voyage, was donated in 1920 by a wool baron. On one side, a statue represents the native Yaghan people. According to legend, if you kiss the foot you’ll return. Apparently many people believe this, as evidenced by the polished appearance in comparison to the rest of the weathered statue. As much as I’d like to spend more time in Punta Arenas, I didn’t kiss the foot.

The tour continued past opulent mansions, neatly sculpted trees and stopped at an overcrowded view point. With two cruise ships in port, the town was bustling. The overstuffed booths of opportunistic vendors lined the street as they peddled their tee shirts, sweaters, refrigerator magnets, and other souvenirs.

Our next stop was the Museo Regional Salesiano, or as the sign proclaimed, “Museo Salesiano Maggiorino Borgatello.” No photos were allowed inside. This museum is not ADA friendly, so rather than wear his knees out further navigating four levels of stairs, Larry stayed on the first floor and enjoyed the exhibits as the crowd moved on. With exhibits of the flora, fauna, and displays of native inhabitants and early settlers, it was worth the visit to gain more understanding of the history and progress of this region.

Along the rambla (waterfront avenue) we saw mounted police and a statue depicting the arrival of the explorers. Sculptors’ renditions of historical events are always fascinating.

On the way back to the port, we passed several “duty free” shops or “zona franca” where certain products can be imported into the country under a reduced-tax regimen.

Punta Arenas (which means Sandy Point) is the capital city of Chile’s southernmost region, Magallanes and Antartica Chilena. It is the largest city below the 46th parallel south. Punta Arenas was originally established by the Chilean government in 1848 as a tiny penal colony to proclaim sovereignty over the Strait.

Until the Panama Canal was completed, Punta Arenas flourished with ships stopping on their journey to the west coast of North America. Waves of European immigrants, mainly from Croatia and Russia attracted to the gold rush and sheep farming boom in the 1880s and early 1900s, settled. The largest sheep company, controlling 10,000 square kilometers in Chile and Argentina, was based in Punta Arenas, and its owners lived there.

Our location guide, Brett, provided scenic commentary as we sailed toward Cape Horn, through the Strait of Magellan, named for the explorer Ferdinand Magellan who discovered it in 1520. Can you imagine it took Magellan thirty-eight days to sail the route we took?

Tonight’s entertainment was Michael Christian Durrant, whose enchanting performance on classical guitar was almost sensuous as his fingers carried forth timeless refrains. He took us on an international journey to Japan with the Cherry Blossom Folk Song. We were transported back in time with Pachelbel’s Canon and Clair de Lune. His entire performance was mesmerizing. We were ready for peaceful sleep!