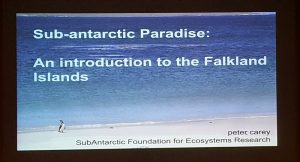 On cruises with more than a few sea days, having the opportunity to participate in a book club is one of my favorite activities. The cruise line chooses books that are in keeping with the geographic areas we’re visiting. So, the first choice for this cruise was, “The Nature of Ice,” by Robyn Mundy. It’s an historic novel that recounts the story of a photographer from Australia, named Freya. Her goal is to retrace and re-create images from the ill-fated 1911-1914, expedition of a photographer, Frank Hurley, and explorer, Douglas Mawson.

The chapters alternate between Freya’s polar adventures and excerpts from Hurley’s diary. It’s interspersed with her struggle to make a decision about her stifling marriage. As with all good novels, it touched every emotion. And, gathering with others in book club, provided lively discussions. I inadvertently missed the first discussion, so it was good to attend this one . . . even at the uncivilized hour of nine a.m.

In preparation for anchoring off the Falkland’s tomorrow, Dr. Peter Carey, presented information the natural history of the area and a few travel tips.

The Falklands, though stumbled upon by a few Europeans in the fifteen and sixteen-hundreds, didn’t have its first permanent settlement until 1764. It’s presumed the first sailors were Portuguese, since the island appeared on maps from that country drawn in 1519 and 1586. A Spanish ship was there for a few months in the winter of 1540.

A permanent colony wasn’t established until 1764, by French explorer de Bougainville, who established Port Louis in the north-east of East Falkland. The islands were sometimes called the Malouines. And, in Argentina they are called by the Spanish version of this name . . . Islas Malvinas.

The French colony was unbeknownst to the British, who established a settlement in 1766. Once they discovered each other, the bickering over ownership began and continues to this day.

Britain gained control when it forced the Argentinians out in 1833. That lasted until 1982, when Argentina invaded and occupied the islands for seventy-four days. Only three Falklanders died but casualties were heavy for Argentina, who lost nine-hundred-seven lives.

Britain continues to maintain control and it’s not acceptable to mention the Falklands in polite conversation in Argentina.

Don’t expect an ATM. There is only one bank. Most, but not all, shops will take credit cards. And, remember to look both ways when you cross the street. They do drive opposite the U.S.

Flights from the island are based on demand. You can call and schedule a flight, and then tune into the radio station at 6:15 p.m. when the names of those flying and the flight times are announced.

With a tour first thing in the morning we had to turn in early. The ship is to arrive at 7:00 a.m.