In the first foundation of Buenos Aires, Spanish sailors arrived in the Rio de la Plata by the blessings of the “Santa Maria de los Buenos Aires,” the “Holy Virgin Mary of the Good Winds” who was said to have given them the good winds to reach the coast of what is today the modern city of Buenos Aires.

Buenos Aires dates from 1536, when Spanish explorer Pedro de Mendoza camped on a bluff above the Rio de la Plata, possibly at the site of the present day Parque Lazama. The city was abandoned in 1542, after attacks by the indigenous people.

A second (and permanent) settlement was established in June 1580 by Juan de Garay, who sailed down the Paraná River from Asunción, which is now the capital of Paraguay. Argentinians defeated the British who later invaded, and two attempts by the French failed to force the city into submission. Foreign powers eventually desisted from their demands. Ironically, current day Buenos Aires has a reputation as being the “Paris of the South.”

Immigrants from all over the world have made this a truly, large multicultural city with a population of around seventeen million. Nationalities include: German, Scottish, Norwegian, Polish, French, Portuguese, Swedish, Greek, Czech, Croatian, Dutch, Russian, Montenegrinian, English, Hungarian and Bulgarian, Romanian, Ukrainian, Chinese, and Japanese. As well as, two-hundred-fifty-thousand Jews, most of which are of Northern, Western, Central, and Eastern European Ashkenazi origin, primarily Swedish, Dutch, Polish, German, and Russian Jews, with a significant Sephardic minority, which are mostly made up of Syrian Jews and Lebanese Jews.

Christianity is the predominant religion and seventy percent are Roman Catholic. Cardinal Jorge Bergoglio, the former archbishop was elected as Pope Francis in March 2013. There are Protestant, Orthodox Christian, Muslim, Jewish, Jehovah’s Witnesses, Mormon, and Buddhist minorities. The city is home to the largest mosque in South America.

Like Washington, D.C., the City of Buenos Aires was federalized and is autonomous. It gets a bit confusing because the province is also called Buenos Aires. 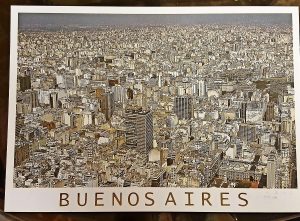