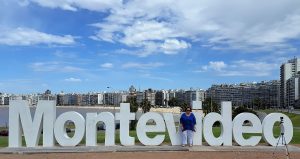 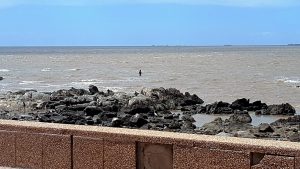 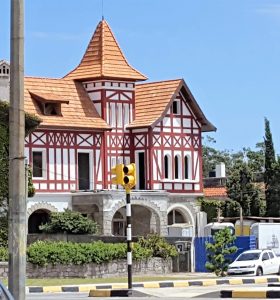 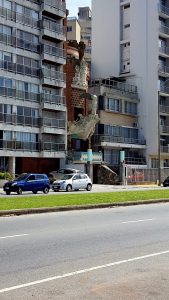 Narrowest house between two modern ones 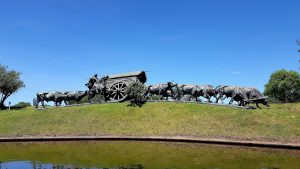 Monument to the gauchos taking their wares to market 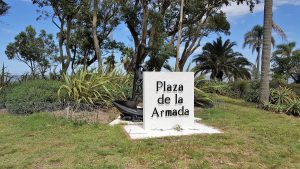 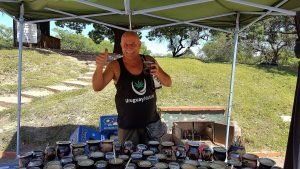 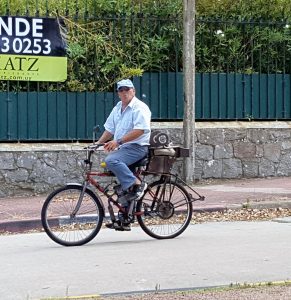 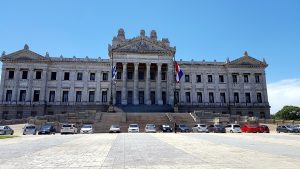 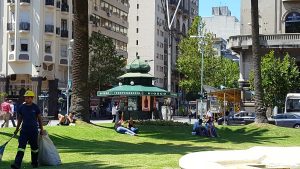 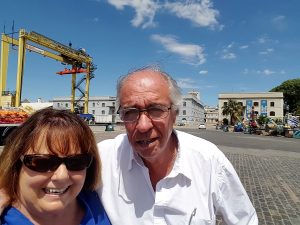 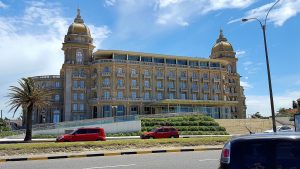 Uruguay, which is about the size of England and Wales combined, is one of the smallest countries in South America, with a population of just over three million. Most of the people are of Spanish and Italian descent and the country is considered the most “European” on the continent. Montevideo, the capital, was founded in 1726, and has one and a half million residents. Located on the peninsula, the Ciudad Vieja (Old City,) has narrow streets, large plazas, and elegant colonial architecture. It was surrounded by a protective wall until 1829.The Ciudad Nueva (New City,) is where the more prosperous residents live.

Larry contracted the cold that our friends shared, so he stayed in. I went on the tour with Mike and Carol from Georgia, and Lynn and David from Ohio. We left the port area, and drove along the Rambla (malécon, or, avenue that borders the water,) which changed names several times along the way. One section was Rambla Gandhi, in honor of the Indian of the same name.

Driving along the water, that seemed to go on forever, it was hard to believe it was a river. A lone fisherman stood in muddy, hip deep water with a long pole waiting for a bite. Larry would have loved it . . . no license required! With no threat of sharks, or tsunami’s, the beach is safe for swimming, and presumably mud baths.

Several areas had exercise equipment for public use. And, a lot of people were jogging along the paved paths. As beautiful as the area appeared, it was really hard to believe they were hit by a cyclone just a few days before. We did see broken tree branches, and occasional piles of green debris waiting to be picked up.

We stopped for photo op’s of the opulent former Carrasco Hotel and Casino built in 1921, now a Sofitel Hotel. Other impressive sites included: a Dutch-style home built in 1911 that was recently refurbished; the narrowest house in the city, built between two modern high-rises; and, a monument to the gauchos taking their wares to market.

It was in this area, the “Happy Maté” seller peddled his wares. Yerba maté is an herbal drink common to South America. I’ve heard of yerba maté and even tried it in tea-bag form the U.S., but not in the traditional South American fashion. I’m determined to learn more about the tradition and use. According to the little booklet I purchased, “sharing a maté is synonym of friendship, confidence, even sense of peace. “ Traditionally, it’s drunk from a “maté,” or pumpkin (gourd) or wood container, using a special “straw” that filters the liquid. There’s more to learn and share!

While stopped to snap photos of the Plaza de la Armada, a knife sharpener happened by peddling his service . . . literally! Apparently he sounds a special tune and the maids know he is in the neighborhood.   We were definitely in the upper class area now! Many of the homes were occupied by families of the various embassies. Most had walls and gates setting them apart from neighbors. Neatly groomed tropical landscaping, tile roofs, and stucco “Southern California” style homes were the norm. Maybe Southern California copied them! As our driver/tour guide, Carmen, narrated along the way, I felt as though I’d been transported to La Jolla, California . . . an area where many of the upper echelon live in San Diego County.

Our tour continued to Plaza Constitución, which as Carmen explained, has thirty-three palm trees bordering it. When we were in front of the Palacio Legislativo, he went on to share there are ties to the Masonic Order, as evidenced in many areas around town. Interesting, eh?

We returned to the port in time to buy a few postcards, stamps . . . and the usual fridge magnet.

Larry was still feeling puny with his cold, so we ordered room service, and checked out free DVD’s . . . “Man of the House” starring Tommy Lee Jones, and “The Hoax” starring Richard Gere. Both were pretty good!