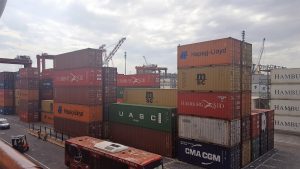 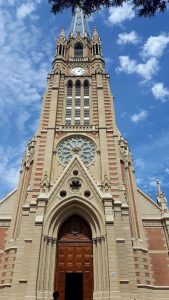 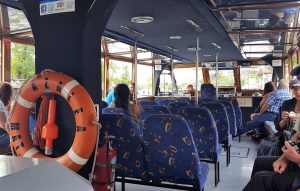 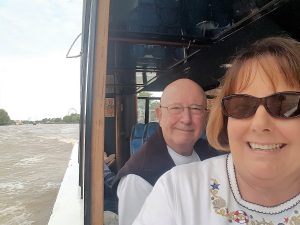 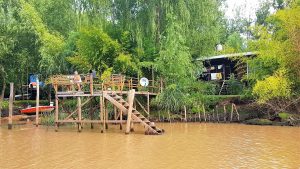 Roughin’ it on the river 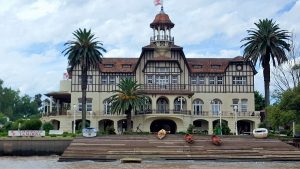 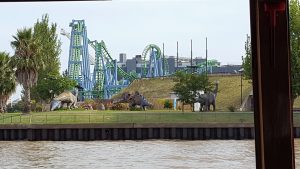 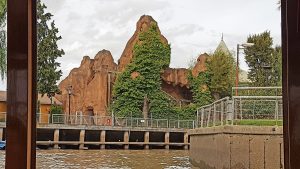 Is this the mine train ride at Disneyland? 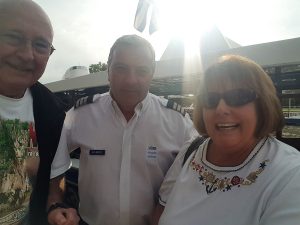 With the River Boat Skipper 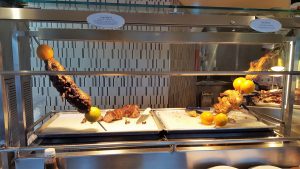 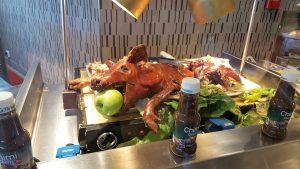 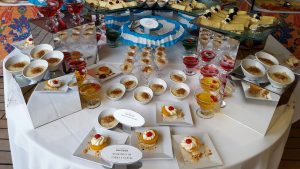 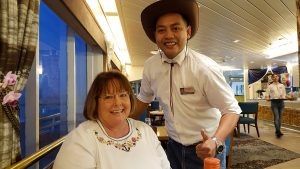 Our first day here, we had a Tigre Delta and River Cruise, we’d booked through Costco. This is a very large shipping port, so a free shuttle took us to the cruise terminal. There were a few “shops” in the form of booths, a café, tourist information, and restrooms . . . but no wifi.

We met our tour guide, outside door four. We were in a small bus with a couple from the UK, and four people from Peru, so, the tour was in Spanish and English. Our tour guide described the sights and provided interesting information as we made our way through the city.

We stopped at a cathedral for photos, and then continued to the river. Río de la Plata translates to River of Silver. It’s immediately obvious the name is not from the color. The color is consistently muddy and it’s a wonder any marine creatures can breathe in the brackish water. It is the widest river in the world (yup. . . . even the Amazon), with a maximum width of about 220 kilometres (140 mi) and a total surface area of about 35,000 square kilometres (14,000 sq. mi.)

Sebastian Cabot acquired silver trinkets trading with the Guaraní near today’s Asunción, and these objects (together with legends of a “Sierra de la Plata” in the South American interior brought back by earlier explorers) inspired him to rename the river Río de la Plata.

We boarded the river boat, and sailed past Argentinian Navy ships, various other vessels, private rowing clubs, old and new homes, (some of which had seen their better days,) a private school, restaurants, a store of some sort, a museum, and an amusement park . . . all of which are built on islands. Residents receive service via grocery boats, propane delivery boats, garbage pick-up boats, etc. It all seemed like an idyllic way to get away from the hustle and bustle of the big city.

We re-boarded the bus, and headed back to the city. It was obvious there was severe poverty in areas. Tenements appeared either half-finished or half demolished . . . it was hard to tell which. Many had no windows, doors or roofs. Laundry hung from lines, sagging from the weight. There was no evidence of electricity or running water.

We could choose to be dropped off at one of three points. One was a shopping center where the ship’s shuttle was delivering and picking up, so that seemed a good choice. Since we weren’t sure when the shuttle would arrive or exactly where, we hailed a cab for a ten dollar e-ticket ride. We seemed to be at peak traffic time.

At one point, our driver made a left turn to get through before the light changed. There really wasn’t space to get all the way into the traffic lane, so cars with the right of way were forced to go around us as they honked to express their displeasure.

Tonight’s “Gaucho Dinner” was a change of pace, complete with costumed servers.