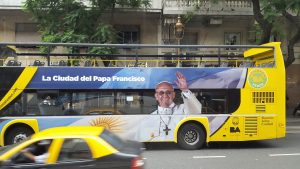 City of the Pope 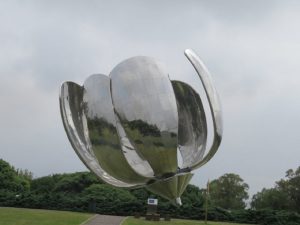 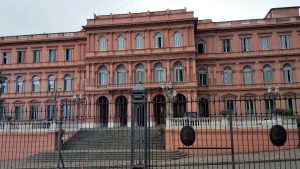 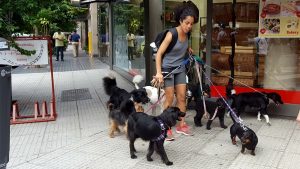 One of many dog walkers 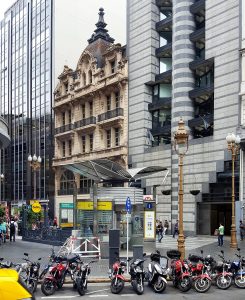 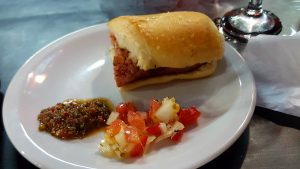 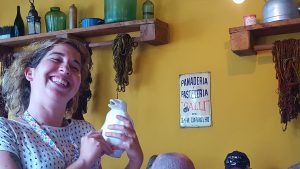 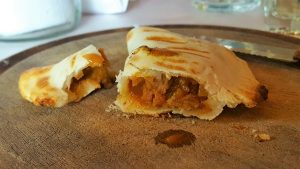 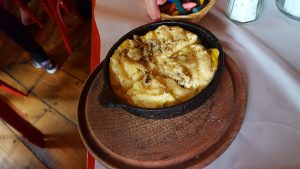 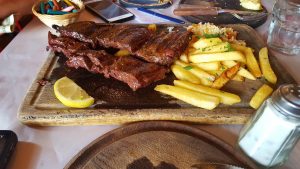 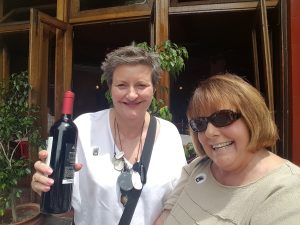 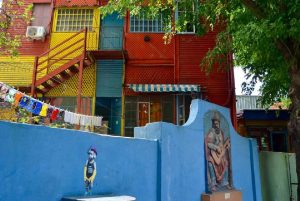 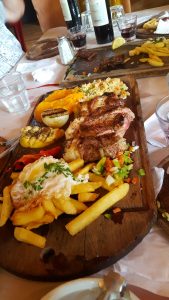 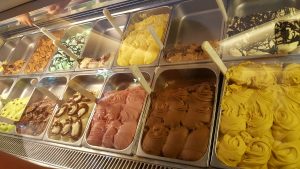 The next day, Julianne and I, had what was described as a “walking culinary tour.” We boarded a bus and were happy to have a narrated tour of parts of the city I hadn’t seen the day before. We finally disembarked in an area that was not bustling with traffic, and set off on foot for our first stop, Parilla La Cañita. Here we enjoyed Choripan with Chimichurri and another type of condiment. The Choripan was chorizo sausage on a fresh roll. It was delicious all by itself! I do believe it’s the best chorizo I’ve ever tasted.

Chimichurri is a condiment made with parsley, onion, red wine vinegar or red wine, olive oil, garlic, oregano, pinch of sugar, salt and pepper to taste, and cayenne pepper or red pepper flakes to your taste. It’s considered an indispensable accompaniment to grilled meats in Argentina, and goes well with poultry or fish. It can easily be tailored to your taste.

Since we were on a ship’s tour, we could bring a bottle of wine back with us. The Malbec we tasted was good, so that was my choice. And, it was reasonably priced at $10 U.S. We’ve learned that most of the towns we’ve been to or are going to, are happy to have U.S. dollars. We found that to be the case on most of our cruise last year, except in Europe. The sense behind it is that the U.S. dollar is more stable that other countries currency. Yay for us!

Another surprising note about the U.S. dollar, is that people have to buy real estate with dollars, not pesos! With forty-two percent inflation, and the instability of the peso, this seems smart on the sellers’ part.

Our next stop was at Las Cholas. There we started with a tasty empanada (meat pie). If you haven’t ever had one they’re worth a try! We’ve enjoyed them in Mexico many times, and found the filling in this one very tasty. Not to spicy!

Following our empanada, we were served a melted cheese in a cute little cast iron pan. It was a semi-hard cheese, like Dutch Edam, so it was only slightly melted in the brick oven. But, very tasty! While we savored this, Eileen explained the cute penguin pitcher. She said that when Argentina began to make wine it wasn’t very good, so they served it in these cute pitchers. It didn’t taste better, but it was fun to serve. We had a chenin blanc with the empanada and cheese.

Next came the beef. Remember the commercial from years ago, where the (ahem) older woman, sat in the fast food restaurant and yelled out, “Where’s the beef?” That could never have aired in Argentina! They know where the beef is and eat it regularly. Eileen said they eat so much beef, they consider chicken a vegetable.

Our next family-style serving was skirt steak, expertly grilled and served with fat French fries and rice. Seriously! As if anyone would eat rice and fries with it!

Besides Malbec wine, next came sirloin steak, with more fries (this time with a friend egg on top,) more rice, and grilled veggies. We also had a spinach salad on the side. There were a lot of left-overs!

We managed to make our way to the next stop for ice cream. Though I rarely indulge in dessert, I figured when in Buenos Aires . . . and had the dulce de leche ice cream. It was melting fast, so of course I had to eat it!

We arrived back at the cruise terminal in time for Julianne to get a few postcards and for me to get stamps to mail the ones I got the day before.