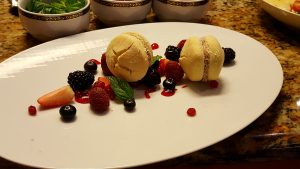 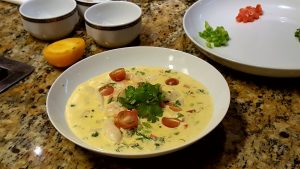 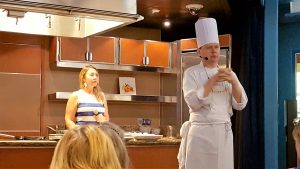 One of my favorite events to attend on board is the culinary programs. On other “dam” ships, I’ve been able to take several classes, where we cook with the guest chef. The Culinary Arts Center on the Prinsendam is so small participant classes aren’t possible. So, the next best thing is watching the chef prepare recipes.

Our guest chef for now is Hervé Laurent. Though he was educated in France, and still has a strong French accent, he now has the School of Culinary Arts Central America, located in Argentina. He was very pleasant and it would have been fun to actually cook with him.

Today he demonstrated Brazilian Seafood Soup with Coconut, Lime and Coriander. This one did sound yummy and is somewhat like a soup I make at home using coconut milk and shrimp or chicken. Keep in mind that what is called coriander in this part of the world, is what we call cilantro.

He also demonstrated making Argentinian Alfarores, a cookie filled with Dulce de Leche. I will try this one at home . . . especially since Larry was gifted a jar of the filling!  Hannah, the Culinary Arts Hostess, keeps things running smoothly while the chef cooks.

It was time to pick up the next book for Book Club, The Gods of Tango, by Carolina De Robertis. This one came with a disclaimer, “As the reviews suggest, this book is very sexual and has LGBT themes. It is also by an award winning author with many positive reviews and has been chosen for it’s merits and setting. The story transports the reader into the life and culture of a Buenos Aires immigrant, and takes you to the dark nightlife that birthed the Tango. While some of the themes and language might be uncomfortable for some readers, those who do chose to read the book will have much to discuss from this prime example of South American Literature.”

Our librarian, Megan, handed out the disclaimer with the book, and, said that one woman responded, “I don’t think it will change me.”

This evening’s entertainment was Richard Gauntlett. “Direct from London’s West End, bringing you a variety of vaudeville entertainment not usually seen in this price range.” He really was very funny and worth watching.

Alas, we lost another hour of sleep. That makes us six hours different than the west coast of the U.S. It also put us in the same time zone as Greenland.

Tonight’s quote: “We wander for distraction, but we travel for fulfillment.”~~Hilaire Belloc