My “kister” (cousin who is more like a sister) Judy, and I recently returned from Daughters of the American Revolution Continental Congress (CC) for our fourth time.  This event takes place in our nation’s capital in June. DAR members, guests, and family members come from all over the world to attend the week-long annual meeting.  Business sessions, committee meetings, and social functions are topped off with formal evening ceremonies at which national DAR award winners are honored.

We attended the first time when I was a new chapter regent (president) in 2012. We were able to schedule a week after CC to do some genealogy research, see the sights, and enjoy an amazing 4th of July fireworks display from the fourteenth floor condo of a friend of mine in Alexandria, Virginia. The panoramic view of twelve displays is imbedded in our memories. 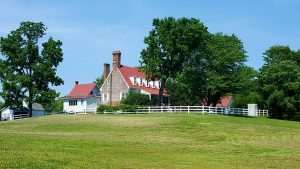 When my “kister” became a chapter regent in 2016, we attended again.  This time we scheduled a week before CC to visit Williamsburg and Jamestown. Not only did we walk in the footsteps of William Claiborne, our tenth great-grandfather, the surveyor for Jamestown in the 1600’s, but we visited a home, built by his grandson, that is on the National Historic Register.  In case you’re interested visit: Sweet Hall.   We also had time to tour Monticello and Mt. Vernon.

Just getting to D.C. from the West Coast is a full day experience.  So, there isn’t time to do much sightseeing the first day.  This year we were ecstatic to have our room upgraded at the JW Marriott.  Being on the “Concierge Floor” and having access to the Executive Lounge was a treat.  We had a view of the Washington Monument, White House and other historic buildings.  This hotel is within walking distance of DAR Headquarters, weather permitting. 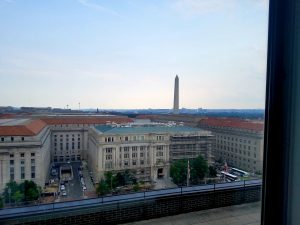 View of the Washington Monument 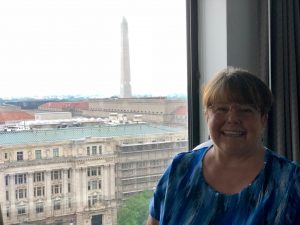 View from our hotel room

Encompassing an entire city block, DAR Headquarters is one of the world’s largest buildings of its kind owned and maintained exclusively by women. Ground was broken for DAR Constitution Hall on June 22, 1928. The cornerstone was laid by Mrs. Calvin Coolidge on October 30, 1928, using the trowel George Washington used to lay the cornerstone at the Capitol in 1793. Mrs. Herbert Hoover was the guest speaker at the formal dedication on April 19, 1929. The first musical event in the hall was on November 2, 1929 and featured Anna Case, Efrem Zimbalist, Sophie Braslau, and Hans Barth.

Memorial Continental Hall, the oldest building of the DAR complex with a seating capacity of 3,702, was designed in 1905 by prominent Washington architect Edward Pearce Casey, designer of the interior of the Library of Congress. 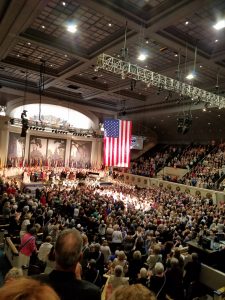 Upon its completion, Memorial Continental Hall was quickly recognized as one of Washington, D.C.’s most elegant buildings. The design for the building is in the classical revival style of the beaux-arts. Because of its classical detailing, the Hall fits in well with the Colonial Revival movement.

Memorial Continental Hall was designated as a Registered National Historic Landmark in 1935 for its role in world history, which includes hosting the famous Conference on the Limitation of Armaments in the wake of WWI (1921). Diplomats from all over the globe met to discuss limits on the proliferation of arms. Their work at Memorial Continental Hall remains a recognized milestone in global peace efforts towards disarmament.

In 1985, the Department of the Interior designated the building a National Historic Landmark due to its national recognition as a center for the performing arts. Constitution Hall is the largest concert hall in Washington, D.C. and hosts a variety of events including concerts, speakers, films, graduations, corporate events, award ceremonies, television productions and gala dinners.

DAR Headquarters also houses the DAR museum, which collects, preserves, and exhibits objects made and used by Americans prior to the Industrial Revolution. Decorative arts are the primary focus of the museum, which has been accredited by the American Alliance of Museums for over four decades. Changing exhibitions and educational programs for all ages provide a variety of opportunities for visitors to experience the DAR Museum. Guided tours of 31 period rooms are available daily.
The museum includes:

Our first full day will be busy with a tour of the U.S. Daughters of 1812 Headquarters and Museum, another lineage organization to which we belong.  Then attendance at a luncheon at Gordon Biersch with the other Oregon daughters attending CC. This will be followed by registration at DAR Headquarters, and our annual dinner at Old Ebbit Grill.

Old Ebbit Grill was Washington’s first saloon, founded in 1856.  It boasts a rich history and a “Who’s Who” list of patrons. With three hundred employees, they serve as many as one thousand customers a day.  One of our group members makes the reservation and we have a table in an alcove that makes conversation much easier in the very busy and noisy environment.  The half-mile walk from the hotel is slightly uphill getting there and much easier going back.

After a very full day, we were ready to settle down to sleep!