The second largest city in the United States by area, Juneau has been the capital of Alaska since 1906.  The current municipality is larger by area than both Rhode Island and Delaware.  Juneau is rather unusual among U.S. capitals (except Honolulu, Hawaii) in that there are no roads connecting the city to the rest of Alaska or to the rest of North America (although ferry service is available for cars).  With Canada immediately to the east, it is the only U.S. capital on an international border.

If you remember your history, the U.S. bought Alaska from Russia in 1867, for 7.2 million dollars.  At the time it was called, “Seward’s Folly.”  William H. Seward was the Secretary of State who negotiated the deal for the United States.

Following the California Gold Rush many miners continued north in search of more gold.  Sitka mining engineer, George Pilz, sent Joe Juneau and Richard Harris to the head of Gold Creek at the urging of Tlingit Chief Kowee.  They reportedly found nuggets “as large as peas and beans.”

On October 18, 1880, the two men marked a 160-acre town site where a mining camp soon sprang up. Within a year, so many miners had arrived that the camp became a village, made up mostly of tents and shacks. It was the first European American settlement to be founded in this territory after the United States purchased Alaska.

Today a huge part of the local economy is based on fishing.  Real estate agencies, federally funded highway construction, and mining are still viable non-government local industries.  Fur trading and whaling declined in the early 1900’s.

Juneau’s daily population can increase by roughly 6,000 people from visiting cruise ships between the months of May and September. We’ve seen four ships in port at the same time and expect the number of passengers is higher than what was listed in literature.

We’re not getting any younger.  So, in planning this trip we kept in mind that it could possibly be our last one to Alaska.  Therefore, it was time to cross off one of my bucket list items.  I’d wanted to fly in a float plane for twenty years, and this was the perfect chance.  We booked it!  At $630.00, it was worth the price, to fly over five glaciers and enjoy the trip to Taku Lodge.

Finding the guide at the bottom of the gangway was easy.  She directed us to the float plane office a short distance away.  While waiting for our plane to arrive we enjoyed a friendly chat with, June, a local who was there with group from her work. 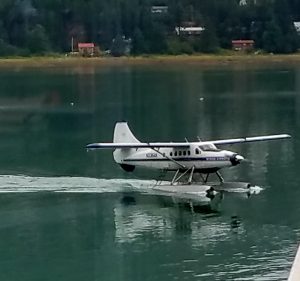 Soon we boarded our plane, which held ten passengers, the pilot and nine-year-old co-pilot.  Ok . . . he wasn’t actually the co-pilot, but had great fun sitting in the 2nd chair and learning about the controls.  He may be a budding bush pilot! 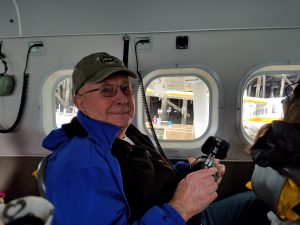 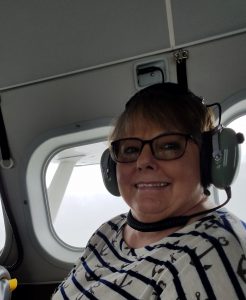 Jacquie listens to the narration 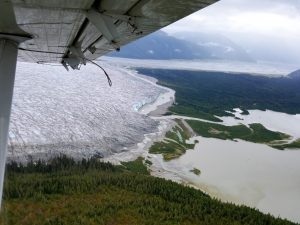 Just one of five glaciers

Recorded narration was provided via our headsets that described each of the five glaciers we flew over enroute to Taku Lodge.  Information was also furnished about the rivers, towns and wildlife.  And, the headsets drowned out the noise of the props.

Our landing was smooth.  Stepping out of the plane to a dock was easy and soon we were welcomed to a homey log cabin for a grilled salmon feast.  Beer and wine was available for purchase.  Hot apple cider, tea, and coffee was included.  As the salmon grilled, the staff shared the history of the lodge. 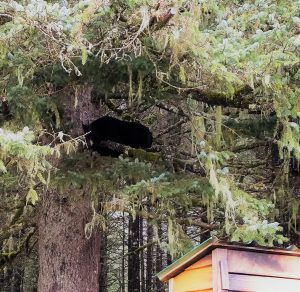 Bear cub in the tree 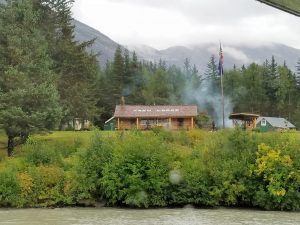 Following lunch there was time to visit the gift shop and/or take a short nature hike, and view a bear cub in a tree before boarding for our return flight.

The flight back to Juneau was just as spectacular as we soared over glaciers.  As we entered the harbor, we saw ours wasn’t the only “dam” ship there.  The Volendam was docked near our Zaandam. 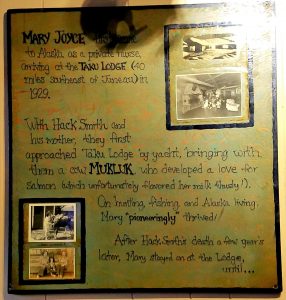 At Taku Lodge we had learned that Mary Joyce (who was originally hired as nurse for the owner and her son) later owned “The Lucky Lady”, an Irish pub in Juneau.  So, in her honor we visited to salute her with a beer.  Sadly they didn’t have my favorite Irish beer, Kilkenny, so we each had an Alaskan beer. 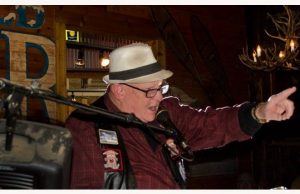 Afterward there was time to stop in at the Red Dog Saloon.  This stop is a “must do” for many people just to say you’ve been there.  Due to allergies, sawdust has taken the place of free peanuts, and piles in drifts on the floor.  In the past we waded through mounds of peanut shells.  The entertainer is a crusty old guy with a repertoire of songs many know by heart.  The staff often sings along.  You can find many souvenirs in the adjacent gift shop. 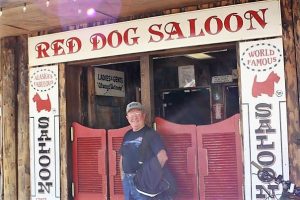 Does this really need a description?

One good thing about cruising near the end of the season is the stores are filled with bargains as they prepare to close for the winter.   Having purchased my share of trinkets on past cruises, I managed not to succumb to temptation.

We returned to the ship for dinner, a movie and some quiet reading time.  We drifted off to sleep with visions of glaciers in our memories.

The ship docked at 8:00 a.m. and was in port until 5:00 p.m.  Disembarkation is easy in this port.  The gangway takes you to the dock, which is conveniently located to plenty of shopping, vendors hawking shore excursions, and transportation or direction to already booked trips.

The southeastern most city in Alaska is the fifth most populace in the state, with population in 2010, of just over eight thousand.  The city is named for the creek that flows through town.  One tourist attraction is the former “Red Light District” of Creek Street.  The first half of the twentieth century brothels lined both sides of the creek. Dolly’s House is a museum dedicated to the town’s most famous madam.  According to the U.S. Postal Service, one of Ketchikan’s two zip codes, 99950, is the highest-numbered in the United States. 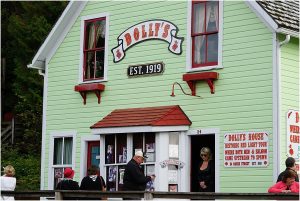 The economy is based upon government services, tourism and commercial fishing and the city is dubbed as the “Salmon Capital of the World.”

A funicular transports passengers to Cape Fox Lodge, where you can see Council of the Clans Totem Pole Circle. 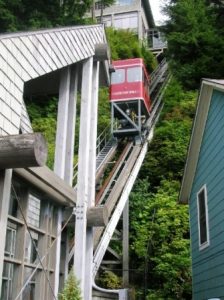 Ketchikan has the world’s largest collection of standing totem poles, found throughout the city and at four major locations: Saxman Totem Park, Totem Bight State Park, Potlatch Park (a twenty-five minute ride,) and the Totem Heritage Center. Most of the totems at Saxman Totem Park and Totem Bight State Park are re-carvings of older poles, a practice that began during the Roosevelt Administration through the Civilian Conservation Corps. The Totem Heritage Center displays preserved 19th-century poles rescued from abandoned village sites near Ketchikan.

We had about half a mile walk to an adjacent dock to board the “Aleutian Ballad,” a boat featured on the “Deadliest Catch” t.v. show, for a three hour tour.  This is one adventure we hadn’t experienced on previous visits here.

The Duck boat disaster in Branson, Missouri, was still fresh in our minds, so the standard safety lecture seized our attention. After a humorous description of how we could relieve ourselves, it was a relief to learn there were indeed real restrooms on board.

It was overcast, but no 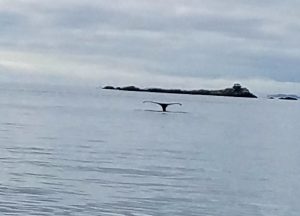 t raining as we navigated the water between Ketchikan and Revillageigedo Island.  Seeing a humpback whale was the first highlight.   We neared an area with a large number of eagles who soared magnificently and dove for fish, providing fabulous photo ops. 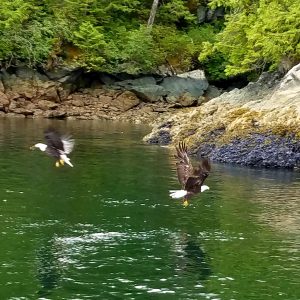 Soon it was time to pull up submerged crab pots, as the equipment and procedure were narrated.  The deckhand coiled rope as the automated wench retrieved the huge traps.

The captain and crew shared stories of their adventures in the Bering Sea.   Their chronicle description of the “rogue wave” that swamped the boat captured everyone’s attention and admiration for their macho daring . . . or 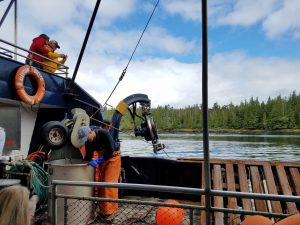 insatiable desire for adventure and making a lot of money during the season. 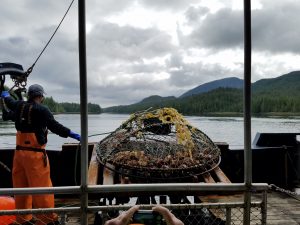 I was especially happy to hear about a project they support called, “Project Healing Waters,” to aid Wounded Warriors in their recovery.  Visit www.projecthealingwaters.org.

It really is a dangerous profession.  A grade school friend of mine worked on a crab boat out of Dutch Harbor, Alaska for a couple of seasons.  She shared some of her experiences with me and it increased my appreciation for king crab many years ago.  Being on an actual crab boat, seeing the equipment first hand, and hearing more stories was worth the experience.  I’m glad my kids didn’t grow up to be crab fishermen.  And, as I enjoy king crab in the future, I’ll say a little prayer of thanks for the brave souls who caught it. 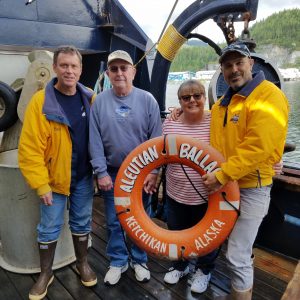 With the captain and crew member

Sleep, luscious sleep!  We awoke rejuvenated.  The “Privacy Please” tag in our door was worth its weight in gold.  Lunch in the Lido buffet was perfect and we were happy to have a lazy day and wander the ship.  In the Crow’s Nest for happy hour, we met a couple with whom we had an instant camaraderie.  Having had similar careers fostered the connection.

Soon after dinner in the Lido, we were happy to turn in early for the next day.