Icy Strait Point is a privately owned tourist destination just outside the small village of Hoonah, Alaska. It is located on Chichagof Island and is named after the nearby Icy Strait.   The island is the fifth largest in the United States!  Owned by Huna Totem Corporation, it is the only privately owned cruise destination in Alaska.  The corporation is owned by approximately 1,350 Alaskan Natives with aboriginal ties to Hoonah and the Glacier Bay area.  Many of them are of the Tlingit people. (Wikipedia) 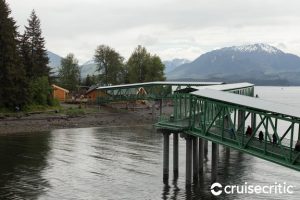 Cruise ships have been visiting this port since 2004. We first visited in 2015.  By 2011, there were  seventy-three cruise ship visits arriving for the summer season.  By one calculation the cruise business accounted for more than half the local economy. Only one ship at a time visits the port, which makes it very manageable and easier for tourists!  In 2016, a dock was built making it much easier than taking a tender ashore. 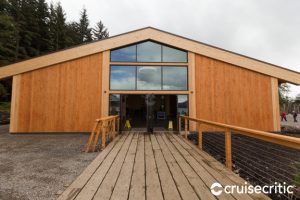 Once you cross the pedestrian dock, the “Adventure Hub” awaits where tours begin and the zip line ends.  The ZipRider claims to be the longest in the world at 5,330 feet. The Duck Point Smokehouse restaurant is right next to the dock.

The former Hoonah Packing Company facility, built in 1912, is a short walk from the Adventure Hub. It was converted into a museum, restaurant, and shops, and is worth the visit for the history of the area and locally made products.  The town of Hoonah is a mile walk, or a short ride on the complimentary bus.

This quaint town is a delightful excursion to an earlier time. In 1944,  a disastrous fire destroyed much of the town. Homes filled with ancient, priceless objects of Tlingit culture were lost to the flames. The federal government helped to rebuild by diverting World War II housing that was en route to Hawaii to Hoonah instead.  These houses, located in the downtown area, are still called the “war houses.”

On this trip we were delighted to have a chance to meet up with our favorite travel agent! Though we hadn’t met in person,  we first became acquainted with Jelena in 2016 while planning a cruise to South America.  Through the Cruise Critic Roll Call we learned of a penguin excursion in Ushuaia, Argentina another couple planned.  I needed to know whether it was something My Honey would be physically able to do.  Mary Ann, who arranged the tour, checked with Jelena, who said this particular tour would be a bit challenging for his knees. I did the one in Ushuaia, and we booked a tour in another port for both of us, thanks to her recommendation.    I checked with her about tours in other countries we were visiting and was extremely pleased with those she booked for us.  We booked a couple of excursions for this cruise through her.

We learned very soon that she delivers excellent service!  Things we appreciate the most . . . her prompt response to our inquiries, her first-hand knowledge of the area, and her personal relationship with tour guides.  If you want to book a tour please connect with Jelena!  We’ve referred several friends who have been equally pleased.   She is especially familiar with Alaska, South America, Europe, New Zealand, and Australia.

The cruise line seems to have realized that outside competitors usually have better prices and are now offering a “Best Price Guarantee” in an effort to keep business.   Just be sure to read the fine print on their website.  We’ve learned over the years that some tours are worth arranging through the cruise line if there is ANY possibility of returning late.  If a cruise line tour is late, they will wait for you or provide transportation for you to return to the ship.  If you booked elsewhere and are late, you’re on your own.

The independent tour operators do their best to make sure you’re back in time.  Their business depends on it.  However, in ports like Jakarta, Indonesia with horrendous traffic I’d think twice about an independent tour.

So, back to Icy Strait Point.  Jelena emailed me that she would be there when we arrived!  Her husband is now the marketing director for Huna Totem Corporation, so they live here part of the time.  She offered to meet us and treat us to lunch . . . an offer we couldn’t refuse.  We were delighted to have a chance to meet her in person!

She met us at the Adventure Hub and we rode the shuttle into town to have lunch at The Fisherman’s Daughter restaurant.  The salmon tacos were as delicious as Jelena described. I’m a fish taco snob and was pleased!    Larry had a fresh fish sandwich.  Both orders were more than we could finish.  We really could have shared a meal and been satisfied. 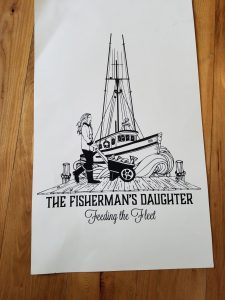 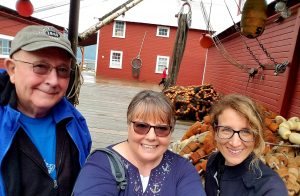 It was amazing to see so many flowers  still in bloom this late in the season!  There was time to walk around a bit and enjoy our too short of a time together.  We look forward to staying in touch with Jelena, sharing her info with others, and hopefully seeing her again soon! 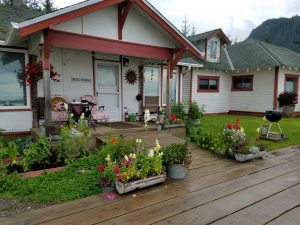 We had an early sail-away so another ship could come into port.

One of the joys of sea-time, is reading time.  It seems there aren’t enough hours in the day when we’re at home.  So far, this trip, I read a John Grisham book, The Whistler, and am nearly finished with a book a friend wrote about his mortuary assistant job while he was in college, Coffee and Donuts with the Dearly Departed, by Steve Frenzl.  It’s really pretty good!